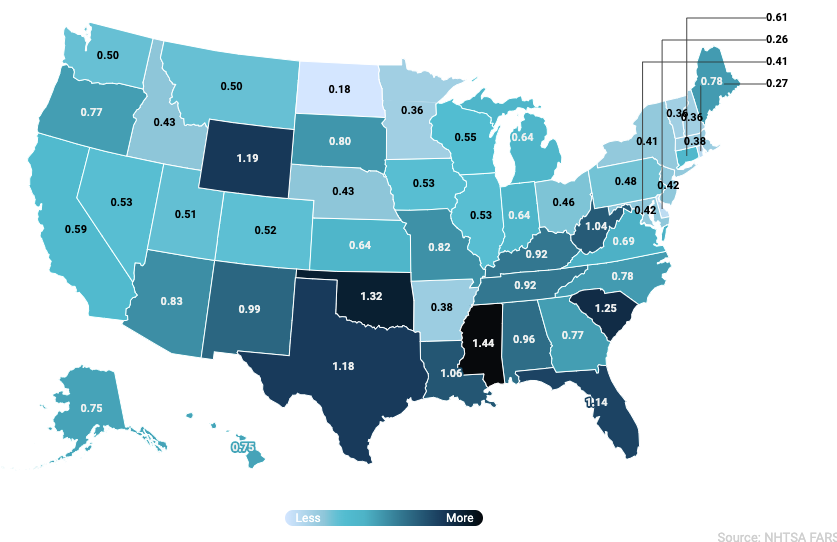 Although New Year’s Eve holiday is one of the most exciting holidays to celebrate an end to the current year and beginning to a new one, it is also a notorious day for accidents. This alcohol-fueled celebration is one of the most dangerous holidays to be out on the road. Millions of people’s lives are at risk, especially those who decide to drive after having a few too many drinks.

The law firm Cannon & Dunphy conducted a study to take a closer look at accidents occurring on New Year’s Eve and Day starting from 2013 through 2018. The goal with the New Years’ fatal crash study was to see when and where the most deadly collisions happen in the United States.

Through their analysis, it was discovered that more than 1,000 people were killed in fatal accidents on NYE and DAY. The data was broken down by:

When looking at fatal crashes across the United States during these holidays, the data was compiled by number of crashes per 100,000 licensed drivers in the time frame of 2013-2018.

As you can see, the states with the darker shade color are the states with the highest crash rates per 100,000 licensed drivers. While the majority of the states stayed between the rate of 0.50-0.80, some states exceeded the range with a rate of 1.20+. States with a crash rate greater than 1.00 included Texas, Wyoming, Oklahoma, Mississippi, Florida, Georgia, and Louisiana.

The 5 states with the highest crash states – making them the most dangerous – were:

Contrary, the states with the lowest crash rates were:

What’s interesting about the data is that the states with the total crashes were: Texas, Florida, and California. Texas reported 188 crashes, while Florida had 167 and California at 154 cases.

Aside from Texas, Florida and California had some of the highest fatal crashes in their states, even though California’s crash rate per 100,000 licensed driver was only 0.59.

Interestingly, the top countries with the highest fatal crashes and fatalities are counties in California, Texas, and one in Arizona. It would make sense that California and Texas counties are on this list, however, an Arizona county places in 4th place of all counties across the United States. The top 5 counties with the most collisions were:

What Time of the Day are People Most at Risk on New Year’s?

We’ve got a clear image of where these fatal collisions happen across the U.S., now the question is when are they happening? It was discovered by the data that the most dangerous times of the day were between 1 am – 3m, with the hours of 12 am-1 am dropping significantly. This is due to people everywhere likely staying where they are to join in on the new year countdown.

It is critically important, especially during the holidays, to drive with extra precaution. Always give your full attention to the road since there is a greater chance of drunk and drowsy drivers sharing the same road as you. If possible, avoid driving in the most popular traffic times as well as in the hours of 1 am to 3 am.

Next post How to Choose an Estate Sale Company