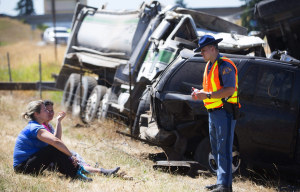 There’s a reason every driver speeds up after finding themselves caught in an 18-wheeler road sandwich and it’s the same reason other passengers grasp to the car door when a driver cuts off a semi truck.

The United States witnesses around 500,000 truck-involved accidents annually, killing 5,000 people. Of the 5,000, two percent of truck collision fatalities are truck drivers while 98 percent are individuals in passenger vehicles or non-occupants such as bicyclists or pedestrians. Fatalities have only continued to rise, with the Federal Motor Carrier Safety Administration citing an 18 percent increase from 2009 to 2012. However, the number of semi trucks on the road and their annual distance traveled is on the decline.

But who to blame for the steady rise in truck accidents is up for debate. It’s most commonly shifted between overworked or distracted truck drivers and passenger vehicle drivers who fail to recognize a truck’s limited visibility and ability to stop.

All politics aside, here are some safety tips for noncommercial and commercial drivers after decades of experience handling related personal injury cases.

The truck industry remains a booming business and companies have put forth efforts to help alleviate their drivers’ pressure and stress. However, driving such large vehicles is inherently risky and demands adequate training and comfortability with long work hours and night travel.

Safety tips for commercial drivers include:

It’s no secret semi trucks weight exponentially more than any passenger vehicle, and for that reason alone it’s imperative drivers use caution when around them to avoid an unfair accident. With their size and weight comes limitations in braking, visibility, and overall maneuverability, three things the hurried driver should not forget.

Safety tips for noncommercial drivers include:

The trucking industry is strictly monitored by state and federal guidelines and companies require drivers keep logs to closely account for their time. Trucking companies understand any accidents can swiftly lead to expensive legal costs and for that reason, will immediately send representation to the scene to begin building a case proving their driver was not at fault.

We suggest noncommercial drivers follow suit and do the same to protect themselves or injured family members. While truck drivers are required to keep daily logs of travel times and follow federally mandated laws, there are still many ways to prove negligence: inadequate training, excess speeds, heavy loads, failure to keep logs, and more. Dangerous roads and other hazards may also be accident contributors, allowing for further legal action.