Located in the Northern midwest, Wisconsin is an average size state in both size and population. Like all states it has its fair share of traffic accidents – there were 540 fatal crashes in 2020 and 115,694 total crashes. In fact for the past 6 years, there have been over 500 fatal accidents every year.

So, where are these accidents happening? A recent study by Mingo & Yankala, S.C. identified the nine most deadly stretches of road throughout the state. NHTSA data from 2000-2019 was analyzed to determine which sections of road have seen the most fatalities.

The nine deadliest roads in Wisconsin are located in Milwaukee, Janesville, Green Bay, and Kenosha. In fact, five out of the top nine roads are in Milwaukee, which makes sense as it’s Wisconsin’s largest city with a population of over 500,000. 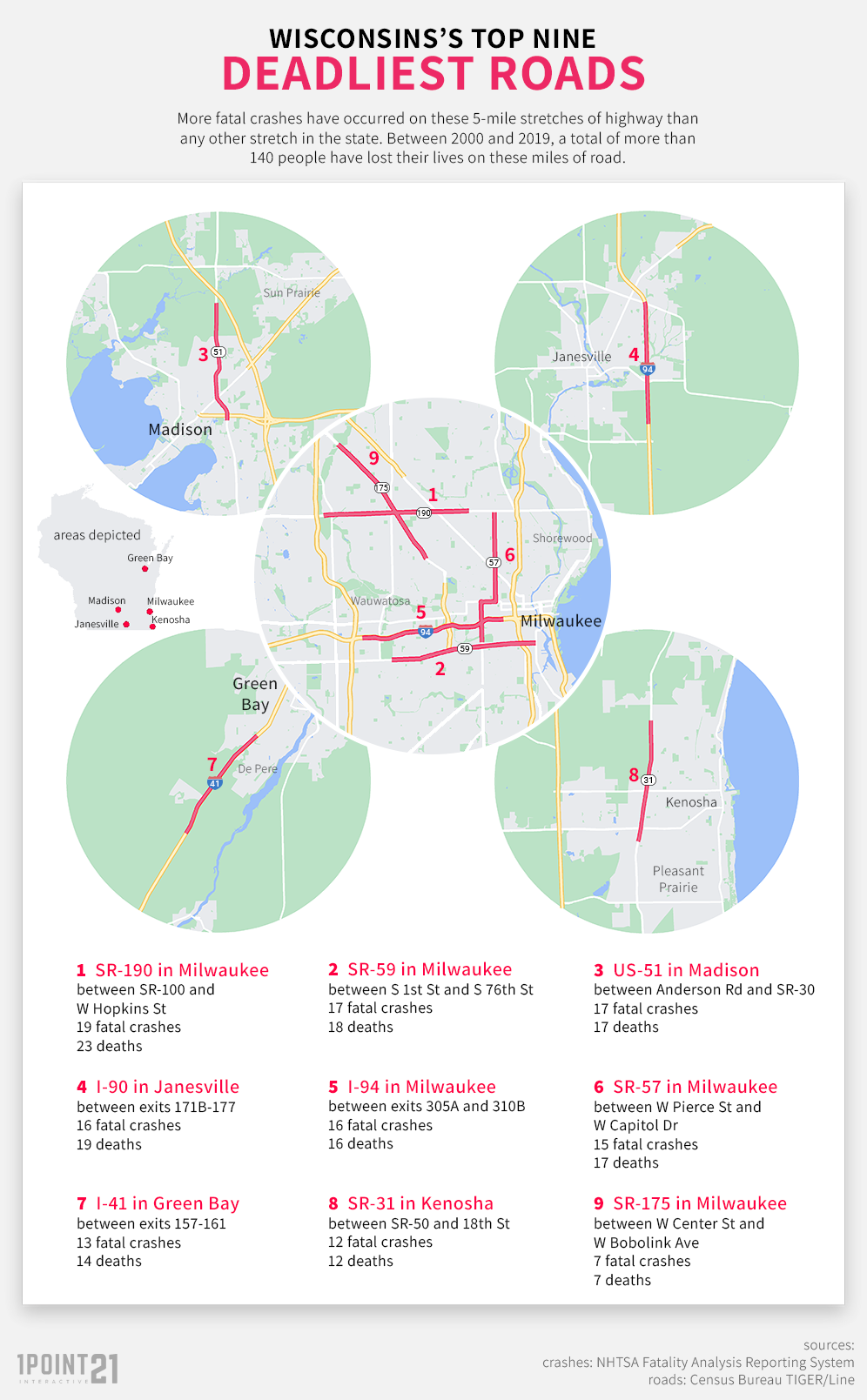 The most deadly section of road in Wisconsin is the SR-190 between exits SR-100 and W Hopkins Street. See the table below for a full list of the top nine. The data uses exits to specify the exact five-mile stretch of road that has had the most fatal crashes.

While we can only speculate on the causes of vehicle accidents in Wisconsin, let’s consider several factors. Wisconsin is a state known for its drinking culture and its fairly relaxed alcohol laws. For example, minors can consume alcohol if they are with their parent, guardian, or spouse of legal drinking age. This drinking culture could potentially lead to drunk driving accidents.

In terms of the type of road, the top five deadliest road segments all intersect with another busy road or a highway interchange. When two heavily trafficked roads connect, the chances of a collision increase. Intersections mean the possibility of cars running red lights or turning without looking. Wisconsin also has plenty of rain and snow, so add that to the mix and you have an even higher risk of accidents due to low visibility.

Another potential cause of accidents in Wisconsin is poor road conditions. According to a report, highways rated “poor or worse” in Wisconsin increased from 7 to 17.5% in 2017 – nearly doubling. Wisconsin also ranked third highest state in need of road repair in 2015, which was a dramatic drop from just ten years prior.

Any number of these reasons could contribute to the number of fatal traffic accidents in Wisconsin. Stay extra vigilant when traveling on the deadliest stretches of road, but driving safely at all times will decrease your risk of an accident.