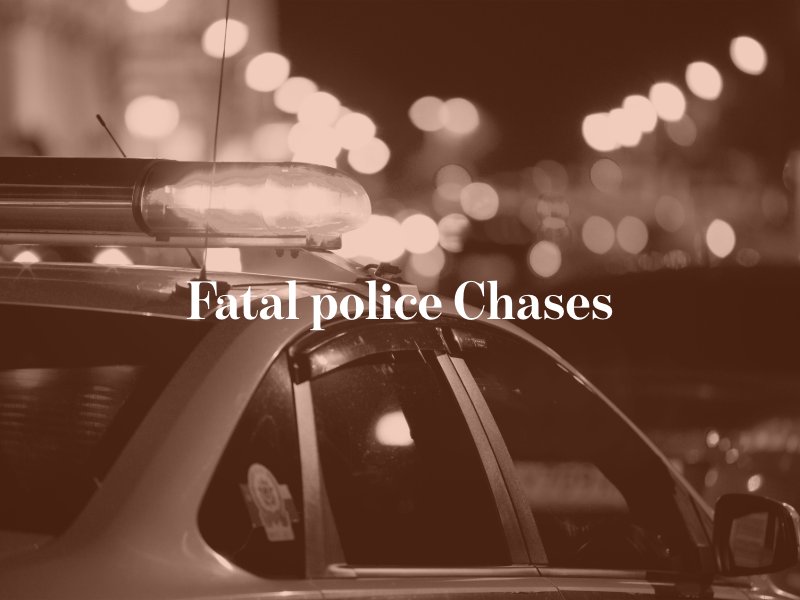 In June 2019, a police officer stopped a driver in Roseville for a broken headlight. As he approached the car, the driver sped away. The officer was told not to pursue the 2006 Impala, but half a mile later, the 25-year-old driver crashed his car into a woman’s car. The impact was so forceful she had to be removed from the wreckage with jaws of life and was admitted to the hospital in serious condition.

Should Roseville police have chased the driver for something as minor as a broken headlight? Probably not. But the fact that the driver chose to disregard law officer’s instructions and flee says something about the person behind the wheel – and so much more.

Would the outcome have been worse if the officer had given chase? Who can say? According to Roseville Police Deputy Chief Donald Glandon, “I wish we all had a crystal ball, but you just don’t know. If a pursuit ensued, would it have been less or more severe?”

To Chase or Not to Chase

Every day, police officers are faced with potentially life and death decisions. In the event an officer must decide whether to pursue a suspect who chooses to flee in a motor vehicle – a decision that must often be made in mere seconds – he or she must decide whether to engage in a chase and potentially endanger the lives of innocent bystanders or to allow an offender who refuses to stop when asked to do so go free, while again potentially endangering the lives of innocent bystanders. Cars can, after, become deadly weapons either way. From 1996 to 2015, an average of 355 people (about 1 per day) were killed annually in pursuit-related crashes.  In just 2014-2018, over 2,000 people were killed in police pursuits.

A police pursuit is an event that is initiated when a law enforcement officer, operating an authorized emergency vehicle, gives notice to stop (either through the use of visual or audible emergency signals or a combination of emergency devices) to a motorist who the officer is attempting to apprehend and that motorist fails to comply with the signal by either maintaining speed, increasing speed, or taking other evasive action to elude the officer’s continued attempts to stop the motorist (National Institute of Justice, 2013).

While most law enforcement agencies have restriction policies in place when it comes to high-speed pursuits, discretion is most often left to the officer who must make snap judgments in many cases. In general, pursuits for minor violations such as running a red light should not be happening; that is simply because the risk to others not involved in the incident is simply too high. In fact, the latest data shows that nearly one third (29%) of those killed in police pursuits are innocent bystanders.

The difficult part for many officers is not getting caught in the “arrest at any cost” trap. In other words, it can be extremely difficult for an officer not to react or get defensive and take it personally when a suspect is instructed to stop, and that person blatantly disregards his or her authority and runs anyway. A grand jury final report found, for example, that out of 8,000 car chases, 42% were the result of a traffic infraction, not some horrific crime, but the officer pursued anyway. A separate national study on police chases by the International Association of Police Chiefs found that 91% of high-speed chases were initiated as a result of nonviolent offenses.

Simply because the need for establishing guidelines was so clear, a model policy was created in 2015 by the International Association of Chiefs of Police. In it, the policy states, “Pursuit is authorized only if the officer has a reasonable belief that the suspect, if allowed to flee, would present a danger to human life or cause serious injury.  In general, pursuits for minor violations are discouraged” (p.1). Further, while police departments do advise their officers to avoid excessive speeds when pursuit is deemed necessary, 57 were killed in crashes where the fleeing suspect was driving at speeds greater than 100 mph.

What the Numbers Say

Clear numbers are hard to come by, as the National Highway and Traffic Safety Association (NHTSA) has no hard and fast guidelines when it comes to how police report pursuits. Additionally, there are some states that do not collect statewide data on police pursuits that lead to crashes. While both police officials and the NHTSA know about potential inaccuracies in the current data, the agency has yet to set clear guidelines for police when it comes to reports on chasing motorists.

The data we do have available show that between 1979 and 2017 some 13,100 people were killed in police pursuits. This number includes suspects, innocent bystanders (pedestrians and other drivers), as well as police officers. Per year, that number averages out to 336 deaths per year. In recent years, the last four in particular, these numbers have steadily spiked. In 2017, the number of people killed in police chases rose to 416 persons – representing a 22% increase over 2013.

Also during that timeframe, innocent bystander deaths totaled more than 2,700 – though that number is imprecise as NHTSA records are unclear and do not differentiate between that and the fleeing suspect. Between 2014 and 2017 alone, nearly 300 of those killed were bystanders.

Our records include available data between 2013 and 2017. During that time there were over 1,900 fatalities (including suspects, uninvolved bystanders, police officers). The graph below includes states with 20 or more fatalities; of those, Texas (the 2nd largest U.S. state after Alaska) and California (the 3rd largest U.S. state) had the highest number of fatalities – not surprising given their size and population. What is disturbing is that Georgia and Michigan had the 3rd and 4th highest number of fatalities respectively when Georgia ranks 24 in size compared to other states and Michigan ranks 11.

Injuries (suspected minor, suspect serious, severity unknown) totaled 1,689 between 2013 and 2017, with highest numbers, again, being in Texas, California, Illinois, Georgia, and Michigan respectively. All states are displayed in the graph below.

California is one state that does track pursuits. A 2018 California Highway Patrol (CHP) Report to the Legislature on data entered into the Department’s Pursuit Reporting System for 2017 is summarized below:

Managing the issues surrounding police pursuits is clearly one of the most difficult for law enforcement. Every year, several hundred persons, police officers included, are injured or killed as a result of pursuit related accidents. “Pursuit related accidents, injuries, and deaths cause significant emotional distress for officers and frequently result in very negative public relations for departments” (The Police Policy Study Council, 2004). Obviously, both officers and police managers see the need to reduce risks inherent in police pursuits.

At the present time, most departments have some sort of pursuit guidelines in place. Additionally, the majority of officers are receiving additional training to help them prepare for pursuit situations. Some states even have case law on the subject of pursuit while others do not.  Still, the matter remains a complex one.

The U.S. Department of Justice (DOT) issued a report in 2017 that presented the latest data (2012-2013). The report reviewed an estimated 68,000 vehicle pursuits by state and local law enforcement agencies nationwide. The majority (59%) were conducted by local police departments, while approximately 27% were conducted by state police and 15% by highway patrol agencies.

Highlights of that report showed that:

The Cost of the Chase

It goes without saying that police pursuits can lead to unintentional harm of innocent bystanders, of property, and of course, litigation. In other words, lawsuits have and will typically follow when a pursuit results in death, injury, and destruction of property that all too often results when a suspect chooses to flee.

Another study by the CHP found that traffic collisions occurred in 26.5% of pursuits, with 1.4% of those collisions resulting in a fatality (CHP, 2018). Of the 39% of suspects who successfully evaded arrest, law enforcement chose to voluntarily abort the pursuit approximately 51% of the time – most often because it was deemed best for public safety.

As difficult as it is, officers must weigh the risks involved before pursuing even a very dangerous suspect – and not just in risk to the public, but in potential liability to their department. In California, for example, approximately 25% of all pursuits end in some type of collision. According to the state’s Highway Patrol (CHP, 2018), 762 injuries and 24 deaths result from police pursuits in 2016, and on average, 23 police pursuits take place every day.

Even in those pursuits where police choose to abort a pursuit, however, they may still be held liable when suspects cause accidents and harm innocent bystanders because they were in the act of fleeing from police. In January of 2014, for example, police officers were pursuing 22-year-old Andrew Stark for speeding in Independence, MO. As they decided to pause the chase on their end, Stark sped away, ran a red light, and crashed into a car that killed the driver and severely injured his two passengers. That crash led to a settlement of $767,500 paid to those passengers and the driver’s wife.

While the 2017 data clearly shows that the majority pursuits are initiated during traffic stops for minor infractions such as license/registration violations, speeding, or failing to obey controls at intersections, many of the suspects captured were charged with serious felony and misdemeanor crimes. Perhaps the fact that a driver flees law enforcement for a minor infraction is suspect in itself.

The pursuit data also indicates that law enforcement apprehended fleeing suspects 60.8% of the time, resulting in a variety of criminal charges beyond evading arrest. It is telling that, 39.2% of the time, suspects were most often charged with driving under the influence, vehicle theft, suspended/unlicensed driver, or resisting arrest once they were apprehended. In other words, regardless of the original observed violation, suspects were charged with a serious crime (felony/misdemeanor) in at least 85.1% of apprehensions.

One of the ways police can avoid high-speed pursuits is by having the equipment they need when it comes to pursuit technology. Millions of dollars are spent outfitting officers with computers, body cameras, and the like, but “pursuit technology remains crude” according to FairWarning (2019). Laying down tire deflating spike sticks is dangerous to officers; better might be the use of high tech solutions that can help officers avoid high-speed pursuits, still catch offenders, and save lives all around.

Next post Watch Your Back: How To Identify Workplace Retaliation